Halloween is my FAVORITE holiday. I've always loved it. When I was a kid it was about the candy, as a teen / young adult it was about getting to dress up any way you wanted too. As an adult I still love to dress up as something different and now I also get to enjoy it through my kids. My husband's family runs a pumpkin patch in Fresno - so to him it reminds him of work (although he doesn't work at the patch now.) But its fun for the kids to visit their papa the Pumpkin King.

This year Lucille wants to be a lion again. Lions are her favorite animal and it is also what she would say she wants to be when she grows up. So its really no surprise. I'm trying to get her to pick something new... but at the same time - I want her to be whatever she wants. I'm still on the hunt for cute costumes and halloween theme outfits for the kids though of course. Even though its the beginning of September - its not too early - and there are already some great deals to check out.

Here are some of my favorite finds: 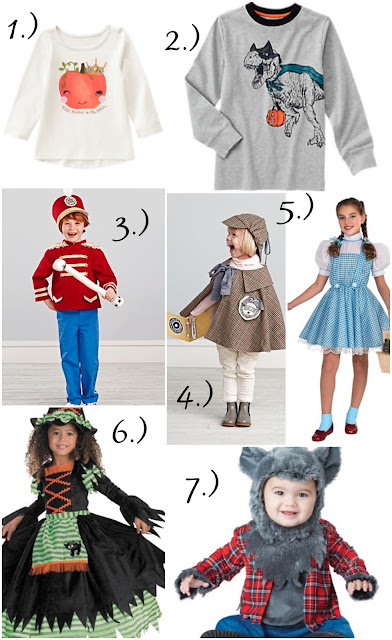 I got Lucille two new costumes that she liked - the Dorothy costume and the Storybook Witch Costume. We got Gus this James the train costume because he picked it out and I KNOW he won't let me pick out something cooler. Trains it is. But man, that Wittle Werewolf costume would have been so dang cute.

What are your kids going to be for Halloween? Are you dressing up?

Some of the links on this post are affiliate links - which helps me be able to keep this blog going! Recommendations are all mine.
Labels: halloween kid-friendly shopping