I had a chance to try out a new service that is available in the Sacramento and Davis area that is like a farmers market delivered to your door called Zipmesh.

It is a really awesome online marketplace that gives you a chance to get some unique items right from local farmers and producers. Zipmesh picks up your order (freshly harvested!) and delivers it to your door. If you want to try out Zipmesh - you can get 20% your first order with discount code: HoneyBee20!

When I decided I was going to place my order - I logged in a saw that they had ground lamb from Skyelark Ranch  - and immediately decided I’d get that and make Yemista. 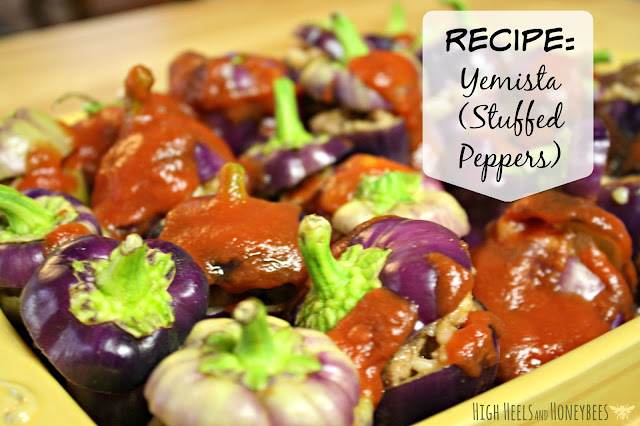 Yemista is a greek meal that is basically stuffed vegetables. It could be peppers or tomatoes. I’m not a huge tomato fan so I went with peppers. Riverdog Farms offered some beautiful purple peppers and I got some torpedo onions, green tomatoes and cabbage all from Riverdog as well.

For the Yemista, I used the purple peppers and the torpedo onions in the recipe below. It was delicious and I had left over of the stuffing so I made stuffed cabbage leaves the next day (called Lahanodolmades.) So when you are looking at this recipe - remember I had left over stuffing! The amount it makes could probably fill 10 full size peppers and or tomatoes. 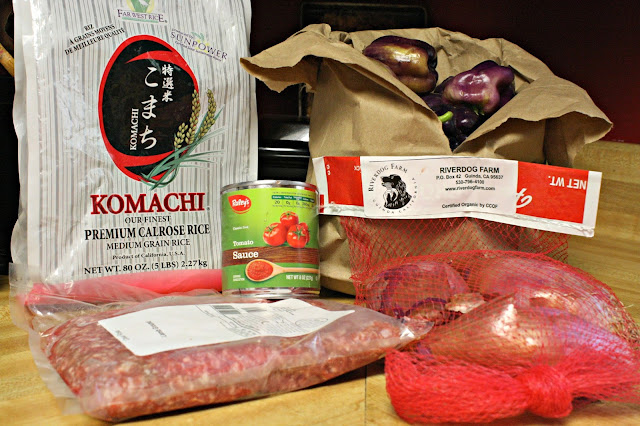 Here is the Yemista recipe.

Saute onions in olive oil, add lamb and brown. Season with salt and pepper and cinnamon. Add 1/4 cup tomato sauce and 1 cup water, rice and bring to a boil. Cook until liquid is absorbed by the rice.

Cut thin slices from top of peppers and scoop out the insides. Arrange in baking pan. Stuff with meat and rice mixture and cap with tops.

Add a little water and tomato sauce mix to the pan. Bake in a 350-degree oven for about 1 hour or until the veggies are done. Check at 30-40 minutes. Basting if needed.
Labels: family food mommy life recipes sacramento