Why all the changes at one year?

As my regular readers (and friends and family) know, Lucille turned one a few weeks ago. She is now walking. I expected this to take weeks to develop from first steps to full blown walking - but it only took a week, maybe two. With the walking has come a sense of independence and confidence which is great (minus the bumps and scrapes she gets from her occasional tumble.) I love watching the little girl she is rapidly developing into -- but I know I'm going to need some advice on a few things. Last week I stumbled upon the One Year and Beyond linkup at The Not Quite Military Wife blog and found some great advice on dealing with temper tantrums. This week's topic is something I can contribute to. Weening from formula to milk.

This is how it started: My husband took Lucille to her doctor's appointment for her one-year check up and got the following advice list from the doctor:

Um. What? That's a lot for a little girl to conquer at once. Why do they pile all these changes on us at once? And potty training?? I'll get into that in another post. So here is what we've done (so far.) 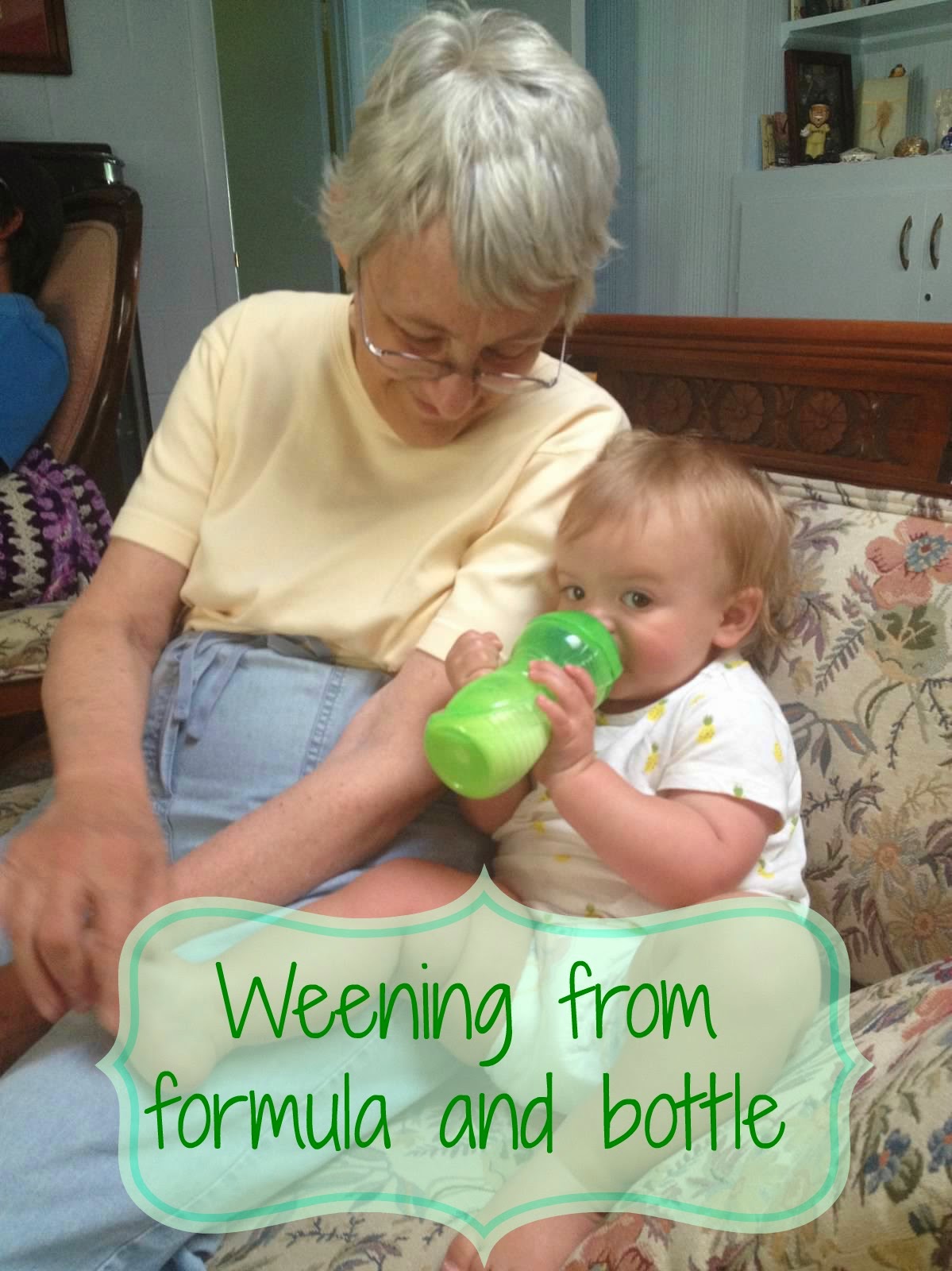 We tried to switch cold-turkey on both the milk and cup at once and we were met with screaming and crying. I think I cried too (hey, I'm 7 months pregnant - give me a break.) Needless to say, it didn't work. We needed to conquer one thing at a time. We started with the formula to milk issue.

So we did a mix of formula and milk in a bottle and kept adjusting the levels until we went all milk and no formula. She took it amazingly well. I hid the formula container from day one - so that she would stop associating it with milk.

We also managed to drop one feeding during this time by offering her a snack in the morning (which she could have with milk in a sippy cup.) We are also trying to offer her more water through out the day to combat her thirstiness.

We then tried to stop giving her a bottle during the day and just offer her milk in a sippy cup. We tried various types of cups and the Munchkin cups seemed to work. I should add that since 6 months she would drink water out of any type of sippy cup you gave her. She was only being particular about what cup she drank milk out of. The mouth piece on the munchkin ones is a little softer than other cups and I think that's why she likes it.

So now we have her drinking 4-6 oz. of milk in the morning (out of a bottle), about 6-8 oz. of milk throughout the day in a sippy cup and 4-6 oz. of milk at night an hour before bedtime (out of a bottle.) We've tried a few times at morning and night to switch to the same sippy cup she drinks happily from throughout the day, but she'll have none of it. I know, we just need to buckle down and do it - but I'm celebrating one win at a time. We are done with formula (for a while) and I am excited.

P.S. I'd love any advice about ditching the bottle completely ... especially at her night feeding. I am a bit scared I'll mess up her bed routine since she sleeps so well.
Labels: baby family kids life mommy life One Year and Beyond