Some readers who don't actually know me personally, may not know just how big a political wonk I am. I grew up with my mom taking me to state budget debates and my grandmother taking me to democratic fundraisers and rallies.

Like this not-so-great picture of me giving flowers to Michael Dukakis when he was running for president in 1988. I took a few days off school (1st grade) just so my grandmother could take me to various events while he was in town. 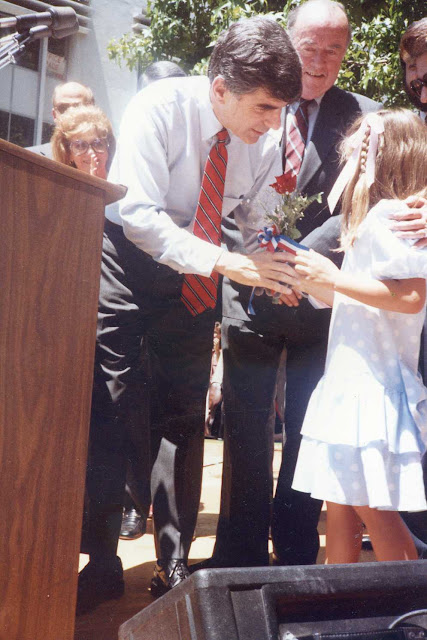 You could say politics are in my blood. My focus in college was government and journalism - and I've worked at the state capitol and around politics ever since.

If you had asked me back in mid-October about this election, I would have told you that I was hoping to maybe head to Nevada for GOTV (Get Out The Vote) weekend to do some walking for Hilary in a state that didn't seem decided. I was hoping to spend election day with my kids - taking them to the polls and talking to Lucille a little bit about politics and the election and the presidency and standing up for what you believe and having the courage to be whoever you want to be.

But life had a different plan for me. Almost 2 weeks ago, my grandmother (the same one who got me involved in politics) passed away. She was a huge part of my life - and has everything to do with who I am today. At least, all the good traits.

With the funeral being last weekend and so much wonderful family coming into town to celebrate her life - I, of course, didn't even think again about spending the weekend in Nevada. And as election day inched closer - her death made me think more about how grateful I am for all that she taught me.

I woke up with a very clingy 2-year -old - who was coughing non-stop and just wanted to be held. After breakfast, Gus proceeded to throw up twice and I started to notice that his breathing wasn't right. After doctor calls, a nap, and an albuterol treatment - we had to take him to see the doctor and Lucille to ballet class. We managed to vote quickly and then divide and conquer.

Jonny took Gus to the doctor and I took Lucille to ballet. After ballet, I got the news that Gus was now at the Emergency Room for his breathing. So I dropped Lucille off with my parents and head to the ER preparing for a long night, like so many others, but my long night was not going to be related to the election.

I spent most of Election night worrying. Worrying mostly about Gus' health and wondering how many more emergency trips are in our future.

As his breathing improved and we started to get cleared to go home - I was able to check the returns and with Trump clearly winning, I started worrying about other things too.

Worrying about all the federal funding that goes into Amtrak and my husband's job. About the access to healthcare we are so lucky to have. About the people in this country who are going to feel helpless, and defeated and scared for their lives after watching a man who has said truly horrible things about so many people be elected to President of the United States.

About the message that this sends to young kids about the type of speech that is acceptable in this country by our leader.

When I finally had a moment this morning to read something - and let it all sink in - my eyes filled up with tears. Luckily, they were only able to last a few moments before the kids woke up and need my full attention.

I am sad.  I am sad that it feels like hate has won. But I will take this as a lesson.

In honor of my grandmother and for the future of my children, I promise that I will say more of what I feel - even if it is going to upset people I care about. I will stand up for discrimination and help the voiceless be heard.

I will pray for President-elect Trump to be a success. Because as an American - his successes will be our successes and his failures will be our failures. This does not mean I have respect for him or I will forget or forgive the horrifying things he has said about people. It simply means I really want our country to succeed.

And, I will also hold him accountable - and be ready to fight for my beliefs and the rights of women, and all the other minority groups that are worried about life under a Trump presidency.

I will not cry and threaten to leave the home I love.

I will remain involved. I will donate time and money to help where I can to keep America on the right track.

I will remind myself that while our country is divided - there are many people out there with beliefs similar to me, that will also continue to fight for progress, equality and an America for everyone.

So I will end this post with prayers of hope and love. Hope and love that I will work extra hard to push out into the universe over the next four years (hopefully not longer.) And I hope you will vow to do the same.

If you are looking for more great posts to read for post-election love - check out the post on A Cup of Jo.
SaveSave
Labels: family mommy life politics