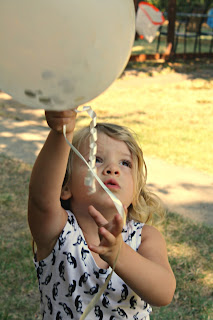 There are things my kids do that totally get on my nerves. Yah, what a way to start a post I know. But I've been trying really hard to find a way to deal with those things that are triggers for me to get mad.


Two of the big things that get to me? Whining (of course) and major meltdown cries. These are more Lucille than Gus - Gus has his own things he does that aren't so great - but we'll save those for another post. When I've figured him out. Haha.

Right now Lucille basically speaks in a whine. I tried whining back at her (really mature, right?) but she just thought it was funny and laughed. I heard on the podcast One Bad Mother the idea of asking her to use her beautiful voice not her whining voice and I liked that idea.

I even go one step further and have her say some words that are impossible to whine all by themselves: "pony" "mermaid" "kitten" and then I have her  repeat whatever it is she whined. So far it seems to work.

This week I heard my husband try something new. He told her to throw her whiny voice out the window. He even named it "Felicia" which totally made me laugh. Especially since I think I watched the movie Friday at least 100 times when I was in high school. Anyways - the idea of tell her to throw it out is actually genius. Because it gives her control and you can later say - "Hey, what happened? I though you threw the Felicia voice out the window?"

For the meltdowns it all has to do with calming down. Breathing. But I know, I hate being told to calm down or breathe. And I did when I was a kid too. We've got emotions and yah that's fine. BUT we can also work through it too.

So I ask Lucille if she wants to blow up an imaginary balloon. If she agrees - I ask her what type of balloon and she assigns it a feeling like "sad" or "happy" or "hurt". Then we count to 3 or 5 and then blow. I then pretend to hand it to her. I tell her too hold it tight and if she starts to slip back into meltdown panic mode, I remind her of the balloon. This normally gives us the ability to talk through what we need to.

Want a resource on Calm Parenting (and understanding triggers?) this from the GIT Mom is a good quick read.

What are things your kids do that bother you and what tricks have you found to work past them?