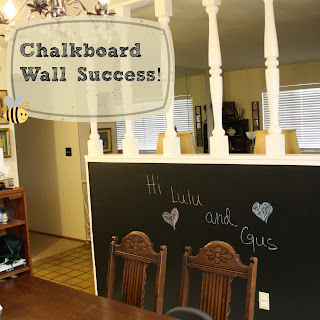 I'm working really hard on making our home a fun and beautiful kid friendly house. Cutting out the clutter and finding meaningful, educational and fun areas of our home.

One idea that my husband and I had been toying with for MONTHS - was the idea of a chalkboard wall in our dining / kitchen area. We have a little half wall that always gets scratched and bumped and marked on. We thought, hey if we make this a chalkboard wall - the kids can play and scratches and marks won't matter.

Luckily, I found a small can of chalkboard paint on clearance at Target a week later. Here is something similar on Amazon - if you are interested. If I hadn't found that can - this would have never gotten done. But it only took two coats (and it only took me less than 1/2 hour to paint each coat.) It dried really fast too. I was able to do the first coat during afternoon nap time.

Only complaint was I couldn't find an eraser at any local stores. Had to order this one from Amazon - but really a damp towel worked fine too. Luckily, Lucille likes erasing as much as she likes drawing. 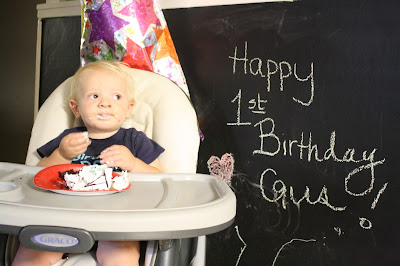 Anyways, we love it. I was a little nervous about doing it in such a central, public place - but what a fun way to allow your kids to write on walls. We even took a few birthday cake shots of Gus in front of it. Now that its been up a few weeks - I'll tell you we are really getting some use out of it.

Now only if I knew how to draw... or at least had decent handwriting...
Labels: Art family home decor kid-friendly kids