I don't post too much about shoes - considering the name of this blog - but they are a pretty constant obsession of mine. Right now they lay sprawled out on the floor of our closet (see picture for evidence.) Its awful. I have to get a handle on it.

I always have a problem of getting rid of shoes -- I just want to keep them forever -- even when they've worn themselves out. They literally have to break before I can toss them. Also - I have an issue of buying really cute shoes - that I end up never wearing - just because they are on sale. Ah, but what girl doesn't have that problem.

Anyways - for some reason this week I've been fixated on solving some of these problems. I've mentioned a few storage solutions before like this shoe ottoman and using an old ladder. In my current house - with our walk-in closet the ladder isn't really an option - and the ottoman doesn't hold nearly enough. So I'm still working on that issue... I need some shelving like this picture maybe.

The other issue is getting rid of ones that really just need to be tossed. I'm working on that. I'm starting with my least favorite type of shoes... sneakers or tennis shoes... or whatever people call them. I'm throwing out two pairs of Adidas that I've had for ever - and really need replacing. No matter how little I wear them. The question is ... what to replace them with?

Here are some that I'm thinking about. Mind you, these are really just for walking - or gardening. I don't run or jog enough to buy new "running shoes." 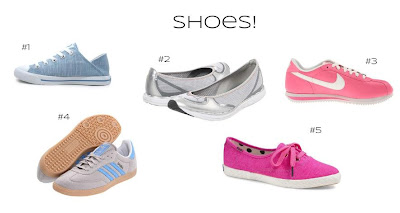 Well, I really like the Keds x kate spade ones - but they are also the most expensive. I'm thinking the Pumas or the Adidas is where I'll land.

Cass said…
Oh you're killing me! Only one of those looks like they're really intended for outdoors. How about something by Merrel--they can be cute?
March 30, 2013 at 10:47 PM

Ellen Martin said…
I have shoes I'd wear walking along the bike trail or that kind of thing. I mean just for walking around the neighborhood. Or pushing a stroller to the park. You don't think these would all be acceptable? :)

But thanks for the Merrel recommendation. I like that they have the Barefoot / Glove style. I hate how bulky most sneaker type shoes look.
April 2, 2013 at 3:20 PM